Dr Viliami Toalei Manu appointed as new CEO for the Ministry of Agriculture Food and Forests effective from November 2016.

Dr Manu’s career in the public service began in 1983 when he was appointed as an Agricultural Officer at the Ministry of Agriculture, Fisheries and Forests. Since then, he has taken over senior positions within the Ministry including Senior Soil Chemist (1991), Principal Soil Scientist (1994) and also Acting CEO from December 2009 to December 2010. He was later promoted to the position of Chief Plant Pathologist in 2001 where he continued to serve prior to his appointment to the Chief Executive Officer position.

Dr Manu has sat on various professional committees namely the Chemical Review Committee of the Rotterdam Convention’s Conference of the Parties as well as the Designated National Authority for Tonga for the Rotterdam Convention on the Prior Informed Consent Procedure for Certain Hazardous Pesticides in International Trade since 2012.

The Public Service Commission welcomes Dr Viliami Toalei Manu’s appointment as the new Chief Executive Officer for Agriculture, Food and Forests and wishes him success in his term in Office. 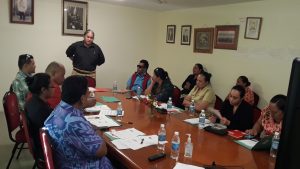